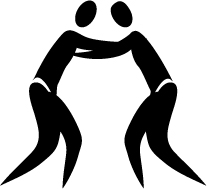 History of Tae Kwon Do Literally, “Art of Kicking and Punching,” tae kwon do is a native Korean form of fighting that embraces kicking, punching, jumping, blocking, dodging, and parrying. It is a system for training both the mind and the body, with an emphasis on the development of moral character. Modern tae kwon do is a combination of the hyung (patterns) of its ancestral combative arts, taekyon and subak, and the kata (formal exercises) of the Okinawan Shuri and the Naha schools of karate. Tae kwon do incorporates the abrupt linear movements of karate and the flowing, circular patterns of kung-fu with native kicking techniques.

In modern times, hand techniques have become increasingly more important in this art. The use of the feet, however, remains the trademark and beauty of tae kwon do. When a new student enters a dojang (practice gym), he becomes part of a family in which he is the youngest member. This concept applies to everyone, regardless of sex or age. The instructor is the head of the family and all who study with him or her are children at different levels of development designated by means of colored belts: white (novice); 1st gold ; 2nd gold; 1st green; 2nd green; 1st blue; 2nd blue; 1st red or brown; 2nd red or brown; and 1st black through 9th black. All grade levels below black belt are called gup or kub; black belt ranks are called dan.

Since tae kwon do is basically a kicking art, every practitioner must devote substantial time developing the legs, hips and back. The first step in training is a lengthy period of stretching exercises designed to make the practitioner limber and able to kick high. The stretching varies in position and direction.

The tae kwon do student also uses wide stances to develop strength in the thighs, a common practice in most martial arts. The length of time the student maintains these stances while practicing increases techniques, as the individual’s strength becomes greater.

Both direct and circular kicks can be delivered in any number of ways, from one foot planted firmly on the ground to jumping with the entire body in the air, to spinning 180 degrees. Most commonly, tae kwon do kicks are delivered from the back stance with the body’s weight distributed anywhere from 60-80 percent on the back leg. Unlike Okinawan and Japanese karate systems, tae kwon do advocates a broader array of kicks with an emphasis on spinning kicks. Many tae kwon do kicks are aimed at head level, which is relatively rare in other martial arts.

Tae kwon do is famous for its flying kicks, a spectacular assortment of techniques which, when executed by an expert, are devastating. All of the basic tae kwon do kicks can be delivered inn a jumping or flying motion. Flying kicks are considered the ultimate in the tae kwon do practitioner’s arsenal of weapons. Although noted for its kicks, tae kwon do practitioners also use a large array of hand techniques to punch, strike or block. As in karate, all parts of the hand and arm are used in attacking as well defending.

The origins of tae kwon do can be traced back to the Koguryo Dynasty, founded in 37 BC. The ceiling of the Muyong-chong (a royal tomb) bore a painting depicting two men facing each other in tae kwon do practice, while the mural paintings of Kakchu-chong (another royal tomb) depict two men wrestling. In reference to this particular painting, Tatashi Saito, a Japanese historian, in the Study of Culture in Ancient Korea, wrote: “The painting either shows us that the person buried in the tomb practiced tae kwon do while he was alive or it tells us that people practiced it, along with dancing and singing, for the purpose of consoling the soul of the dead.”

The construction of these tombs dates to the period between A.D. 3 and 427, during which historians maintain that Hwando province was the capital of Koguryo. It can be inferred that the Koguryo people began practicing tae kwon do during that period.

Tae kwon do was also practiced during the Silla dynasty (668-935). Silla was a kingdom founded in the southeastern part of the land some twenty years before Koguryo in the north. At Kyongju, the ancient capital of Silla, two Buddhist images are inscribed on the Keumkang Ginat Tower at Sokkuram in Pulkak-Sa Temple, portraying two giants facing each other in a tae kwon do stance.

Silla was famous for its hwarang warriors. These knights trained their bodies and minds by devoting themselves to hunting, studying, and the martial arts. Hwarang-do (way of the flower of manhood) was an essential part of SIlla’s struggle to unify the country. Scattered references in the Samguk Yusa, the two oldest documents of Korea’s history, show that the hwarang practiced tae kwon do in their basic training.

Tae kwon do maintained its popularity after the Koguryo and Silla dynasties through the Koryo Dynasty (935-1392). During this dynasty, tae kwon do, as subak, was practiced not only as a skill to improve health and as a sports activity, but encouraged as a martial arts.

The Yi dynasty (1392 – 1907) rulers held scholarship and learning in high esteem and military related pursuits fell into disrepute. Examples of martial arts training are therefore rare during this period. The martial arts for the most part were practiced secretly and passed on by forms from father to son. The final blow came in 1909 with the Japanese annexation of Korea. During the Japanese occupation, which spanned 36 years until 1945, the Resident General banned the practice of martial arts and imprisoned many patriots.

Patriotic young men secretly visited Buddhist temples in remote mountain and rural areas to learn the martial arts and organize underground revolutionary groups. Other Koreans went to China and Japan to work and study, where no restrictions on martial arts training existed. There they were exposed first to kung-fu and in the 1920’s to karate in Japan. They became the first to blend Korea’s style with others in over one thousand years. Back in Korea, Duk Ki Song and II Dong Han managed to keep taekyon alive.

In 1943, rapidly following judo, Japanese karate and Chinese kung-fu were introduced to Korea and enjoyed temporary popularity until Korea’s liberation in 1945. That September, the Korean Judo Association (also called the Korean Yudo Association) was formed. The end of World War II saw thousands of post-occupation Korean emigrants, fired by intense patriotism and nationalistic pride, return home from other parts of the Orient. As part of the national movement to restore Korean traditions, the martial arts were revived and many experts established schools. According to one scholar, the martial arts at this time were often used as an excuse to cover up related business enterprises.

Master Won Kook Lee opened the first post-war dojang in 1945 in Yong Chun, Seoul, Korea; he called it the Chung Do Kwan. Soon after, Hwang Kee established the Moo Duk Kwan in Seoul, teaching tang soo do. These were three original kwans. Six more schools, followed from 1946 to 1953, and in the early 1960’s, at least another four were established. Fragmented by the pre-war secrecy of their teachings and the post-war confusion of reconstruction, it took some ten years before these stylistic spin-offs and adaptations were able to consolidate into a single martial, tae kwon do. Actually, they never did completely consolidate.

In 1952, during the Korean War, a demonstration before President Syngman Rhee evolved into the most significant turning point for Korean Martial Arts. Rhee watched a 30 minute performance by Korean martial arts masters, and was especially impressed when Tae Hi Nam broke 13 roof tiles with a single punch. When the demonstration ended, Rhee asked General Choi Hong Hi some questions about the martial arts. So impressed was Rhee, that he immediately turned to his military chiefs of staff and ordered that all Korean soldiers receive training in these arts. This dictate ultimately accounted for a tremendous surge in schools and students. Later that year, Nam, who had impressed the president with his tile breaking, was assigned to Ft. Benning, Georgia for radio communications training. There he demonstrated before military troops and public, receiving considerable media publicity.

On April 11, 1955, at a pivotal conference of kwan masters, historians, and taekyon promoters, it was decided to standardly adopt the term “tae kwon do” which had been created and submitted by Gen. Choi Hong Hi. The name was approved because of its resemblance to taekyon, and so provides continuity and maintains tradition. Further, it describes both hand and foot techniques. The number of kwans which then consolidated into tae kwon do is the subject of much debate and historical confusion. Not all of the eight major kwans extant at that time merged, and to this day they still have not.

As KTA president, Hi dispatched many demonstrations teams and instructors throughout the world. Jhoon Rhee, “The Father of American Tae Kwon Do,” introduced tae kwon do in the United States when, in 1956, he attended San Marcos Southwest Texas State College. Rhee founded his first public tae kwon do club in San Marcos, in 1958.

Since the official birth of tae kwon do in 1955, the art has spread to almost every country in the world and in 1980 claimed a reported 15 million practitioners, more than any other martial art, in 62 countries. By 1975, more than 700, 000 were reportedly practicing tae kwon do in the United States alone. Today, tae kwon do, tang soo do and hapkido are the three major kicking and punching arts in Korea.

Tae kwon do develops in a practitioner the power to disable an antagonist with the bare hands and feet. But it is also a study in discipline. A tae kwon do master can make a punch, forcible enough to smash boards, touch a sheet of fragile rice paper without breaking it.

The Korean word “do” (also “do” in Japanese, “tao” in Chinese), translated “art,” means more literally “way.” Thus, tae kwon do can be interpreted as “way of being in the world,” as opposed to simply a method one practices or a proficiency in self-defense.

The mind must be relaxed and open to perceive an opponent’s intentions clearly, and one must practice the techniques relentlessly to develop a responsiveness that is instantaneous and correct, an intuitive reflex, requiring no thought or preparation. Response should be synchronized with perception: defense should begin as the opponent’s attack begins.

A practitioner must realize and accept the fact that to stand and defend his life means to risk losing it. Accepting the likelihood of death, fear cannot distract him, an opponent cannot intimidate him, and he is free to perceive and concentrate on the opponent’s weaknesses, rather than his own.