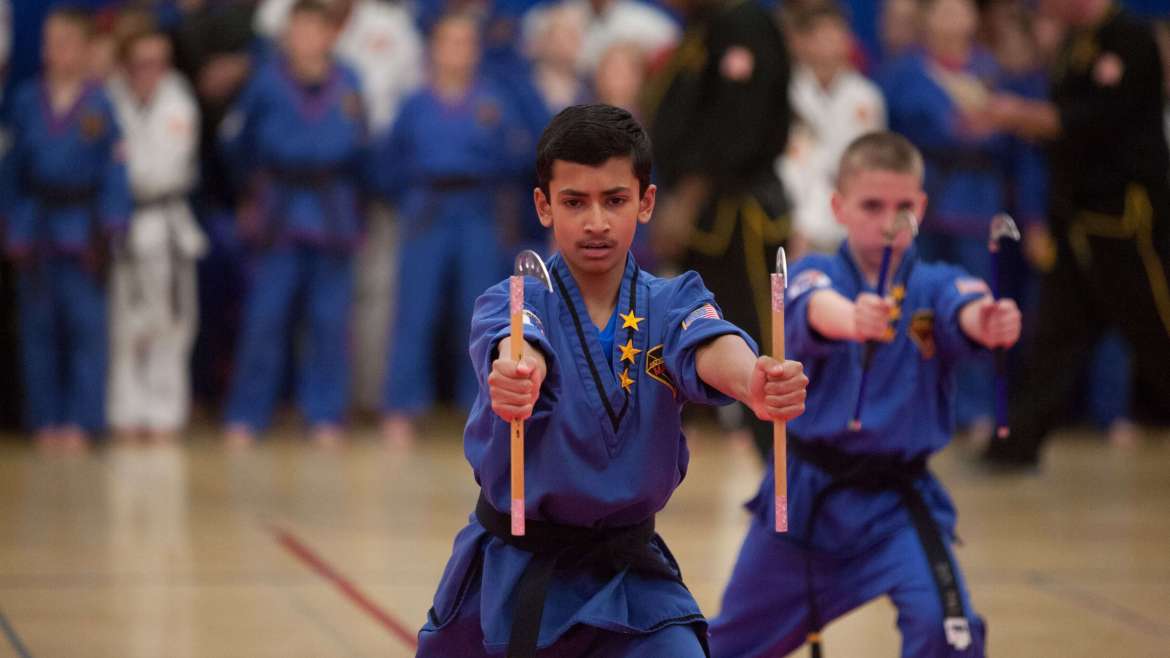 The martial arts explosion
I was introduced to martial arts by my grandfather. He’d take me to the neighborhood drive-in theater to watch the latest martial arts movies. I was hooked from the moment my grandfather introduced me to it. Later in my tweens, the TV series Kung Fu, starring David Carradine, portrayed a Chinese monk—Kwai Chang Caine—on a quest to find his halfbrother armed only with his spiritual training and martial arts skills. I was intrigued by the self-control and inner calm that Caine drew upon as he faced endless conflicts in the wild-west. Then in the early 70’s as sports coverage expanded into less mainstream sports, I eagerly watched an open karate tournament featuring the fighting champion Chuck Norris. Although it didn’t look quite like the beautifully choreographed fights scenes I enjoyed watching with my grandfather, it was an amazing display of speed, balance, laser-beam accuracy and control. The Japanese Samurai, the Chinese Monk, and the American Karate athlete all shared something special. It seems that martial arts can transcend cultures. I began my personal journey with martial arts thirty-eight years ago when I walked into the National Karate Academy of Martial Arts, and I’ve never looked back.

Practicing martial arts builds character
What is special about the martial arts experience? What are the multidimensional aspects that make martial arts different from other sports or artistic endeavors? It’s the martial mindset of the art: you focus on both the combat skill and the artistic expression simultaneously! You can think of martial arts as a ballet of boxing. Balance, precision, and theatric expression are qualities that one must develop to master it. I have had the profound pleasure of watching students grow and experience true feelings of success. I’ve seen both child and adult, men and women, young and old bask in their accomplishments and know that their efforts transformed them in a meaningful and lasting way. “Life changing” is often used to describe what they experienced.

When the attention challenged, the battered and abused, the overweight and the gifted person alike commit themselves to the combat mindset, they all share what millions of people for thousands of years have experienced: physical, even spiritual growth. And from that ideal and proven arrangement of focused thought and physicality emerges a better person—an improved human being, one with grit and determination. There’s inner strength that you develop by “fighting” your way through the perception of your limitations. It may even seem ironic that we can arrive at such a place while amidst the combat mindset. As a parent, I want these qualities for my children. They need to rise to challenges and learn that they can overcome adversity. They need to feel strong and capable.

Practicing martial arts fosters civility
I should be careful to note that when I refer to the “combat” mindset, I’m not suggesting violence as a solution for problem solving or conflict resolution. It’s quite the opposite. Self-defense can escalate into violence if you are given no choice. However, it’s always a sober choice that is made when all other means of avoidance and de-escalation have been exhausted. Of course, if an assailant is intent on an ambush, you have no choice but to react with physical force. My experience has been that where respect for self and others is prevalent in the martial arts culture, the realization of the real and present danger associated with physical violence is understood and avoided whenever possible. Respect for self is the foundation for upholding respect for the welfare of others. We have a motto that encapsulates this notion when we collectively say “might for right” at the end of our training sessions. All participants are reminded to uphold this promise.

Martial arts can be life changing
Tanisha was slight, thin boned and painfully shy. You might guess her age to be 4, although she was almost 7 years old. Her parents Janiah and Phillipe were new to the United States and had only recently immigrated to the Twin Cities. Janiah was a talented chemical engineer. Phillipe ran a small printing business with 5 employees on his payroll. They were eager about their prospects for their future. And the enthusiasm they expressed was tenable and inspiring. It wasn’t until I inquired about their aspirations for Tanisha that I noticed a blemish in their otherwise demure but optimistic demeanor. Tanisha was having anxiety about going to school. She was having bad dreams and refusing at times to go. Apparently, she was being harassed by a bully because of her broken English. They had spoken with the school counselors, the principal and the nurse about how to resolve her anxiety. Since bullying is difficult to squelch, the nurse suggested they bring her to a martial arts school. Perhaps with more confidence she could stave away the emotional abuse that crippled her with anxiety. It was with this hope, and for this purpose, that Janiah and Phillipe enrolled Tanisha in the kids’ program at National Karate.

Rebekah was a busy housewife. Her life revolved around the activities of her children. She allotted little time for herself in her busy day. And much of her energy was zapped before dinner. She had resigned herself to prioritize what was best for everyone else. “That’s what a good mother does,” she believed. The years of multitasking, eating on the go, and sleeping in the gaps had begun to catch up with her. She was overweight, exhausted and unfulfilled by her selfless rut. Deep inside she recognized who she was: a powerful, energetic, athletic person-a go getter! After enrolling her children in the National Karate school, she rationalized that she only had to take that first step towards realizing her burgeoning self. She just needed to begin. Her journey toward that metamorphosis began when she decided to commit to becoming a martial artist. National Karate provided her with the support and encouragement she needed to succeed.

Damien was partially paralyzed on his left side. He could move his left leg well, but his left hand was virtually unresponsive. He had always dreamed of participating in organized sports. However, not being able to run and throw a ball very well limited his prospects for team sports. He did his best to make the tennis team, swimming team, and the hand-ball team. In the end he spent most of his time sitting on the bench, only competing when the team had a safe lead. He knew that he was capable of so much more than he’d been able to achieve. From the moment he walked into the National Karate studio, he knew he had found his home.

Although these scenarios are not about real people, they represent the real and varied experiences of individuals that need and want liberty from limiting forces (if only perceived). There is a common thread among the diversity of interest and concerns held by those who find a home, if even for a moment, in the world of martial arts. That common thread is a burning desire to grow in a meaningful and lasting way.

As an older practitioner, student and professional instructor—I’m 58 as of this writing—I still have the occasion to revisit the moment of bliss that I felt upon receiving my black belt. I experience it vicariously through the achievements of my students. At a black belt ceremony, you are reminded by the intensity of your feelings, and through the tears and joy of those around you, how wonderful the experience is.

There is a subtle power inherent in this eloquent and often quoted Thoreau statement about human or spiritual growth. In the end, the journey is really what we need to realize our potential. It’s said that the masses walk safely in the wake of the collective knowledge and wisdom amassed since the dawn of humanity. That ancient thread of mortality takes form as a spear and at its sharpest point are the few who penetrate the boundaries of human quality, those willing to risk and fail along the path, allowing those who follow to benefit from the wealth of their experience. And as the spear pierces through the membrane of time, those lessons can touch us all. I am grateful to our Grand Masters John Worley and Larry Carnahan for their pioneering efforts to organize and build a system that allows those of us who choose to follow, an opportunity to give back.